Feat. The Performance by Idina Menzel of “Let It Go”

Inside Out is the 2016 Oscar winner for best-animated feature film, and it is the second addition to The Experience Films Collection! This film is everything an EFC film should be: smart, inspiring, emotionally compelling and psychologically adventurous. In essence, the kind of film this blog was founded upon. It will share its EFC spot with its Disney relative, Frozen. Follow along with the bouncing ball, as I use the emotions from the former film to personify the minds of Elsa and Anna in the latter.

Inside Out follows the journey of an 11-year-old girl named Riley as she moves to a new town with her parents. However, the real story takes place inside this lovable girl’s head. Five walking, talking emotion characters inhabit her brain and personify her mental life: Joy, Sadness, Fear, Anger, and Disgust. Each emotion has a specific set of expressive and social responsibilities. Together they color Riley’s memories and govern her behavior.

Lets meet the emotions, shall we?

The Emotions of Elsa & Anna

Overview: Fear presides over Elsa’s psychological kingdom. As a child she exhibits a high-reactive temperament (meaning she is socially cautious, prone to self-criticism and highly dependent on her parents for her emotional stability). A childhood accident in which she nearly kills her sister Anna with her powers exacerbates her fear and self-doubt and robs her of Joy. Sadness hits hard following the tragic death of her parents. After a long and dark time of mourning, Fear acts to stop the pain by desensitizing her emotional capacity, encouraging prudence and introspection instead. The result is a matured character who is wary, wise, coolly detached and, quite frankly, misunderstood by many.

Overview: Anna’s Joy is a triumphant tour de force. As a child, Anna is assertive, adventurous and emotionally resilient. She does not understand why her sister Elsa cannot be the companion she so craves. She has no recollection of Elsa’s powers or that she nearly died by them. Boredom turns to loneliness and grief following the tragic death of her parents. Yet, despite the woes of childhood, Joy perseveres. As an adolescent, Anna is fearlessly opportunistic and radiant in every sense of the word. Her positive glow is refreshing and encouraging to everyone around her. However, her fanciful optimism can sometimes blind her to danger (a hero’s curse, indeed). Disgust serves as a competent co-pilot to Joy. She adds creative flair and a posh sense of style to Anna’s personality.

Frozen Inside Out (Part 1) 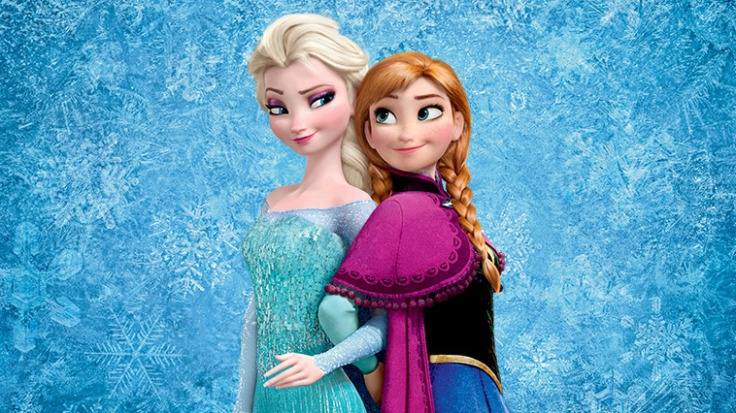 “Some people are worth melting for” – Olaf the snowman

Two sisters, both alike in nobility, in Norse Arendelle, where we lay our scene. From childhood fondness break to estranged adolescence. A bond crystallized by misadventure, fractured by family tragedy. From forth the bitter strife of these two foes springs courage, discovery, and renewed devotion. An act of true love shall resurrect listless hearts, thaw a frozen kingdom, and reignite a kinship long forgotten.

It’s Coronation Day! Anna abounds with Joy in eager anticipation of the day’s festivities. For once she’ll have company and a chance to find true love. The gates open and she scurries out of the castle to meet the guests, all the while caroling, smiling and twirling around street posts like Gene Kelly singin’ in the rain.

Meanwhile, Elsa looks upon the scene with wary eyes. She gives herself a pep-talk from behind the glass of her high keep.

“Conceal, don’t feel; don’t let it show. Make one wrong move and everyone will know.”

Fear remains at the helm, as Elsa is crowned Queen in front of her people. Her power nearly escapes her control, but she manages to recover. That was close!

After the ceremony everyone heads to the ballroom where there is music, dancing and… CHOCOLATE!

Disgust takes over for Anna as she dances with the duke of Weselton. She should be dancing with a tall, handsome prince, not this eccentric old

Fortunately for Anna, Prince Hans soon catches her hand. Joy, welcoming the opportunity, springs into action. She works the evening shift as Hans and Anna

frolic about the grounds, singing about love, sandwiches and god knows what else. Fear mixes in some healthy anxiety throughout the otherwise merry exchange.

Things are going so well that Hans kneels and asks for Anna’s hand in marriage. Joy, overcome with hope, accepts on Anna’s behalf. The pair returns to the party and Anna approaches her sister to ask for her blessing.

At this point Elsa’s Fear tags out Joy, who, until now had been enjoying a rare moment in the spotlight. Sorry Joy, this situation calls for apprehension and a more sober perspective. Fear dispatches Elsa’s train of thought, leading her to judge, “You can’t marry a man you just met.” Anna pleads with her that since it’s true love it’s okay. To which Disgust retorts, “Anna what do you know of true love?”

Anna’s Anger has seen enough, he shoves Joy aside, “What did I ever do to you!? Why do you shut me out?”

Elsa retreats, but Anna is too angry to back down. She presses her sister who is attempting a graceful getaway. She takes Elsa’s glove, exposing her bare hand and then yells “What are you so afraid of!?”

Now it’s Elsa’s turn for an outburst. Anger lunges for the controls, catching Fear off guard. Elsa turns and fires a jagged sheet of ice towards Anna who looks on in terror along with the rest of the guests. Elsa has become a deer in the headlights.

Fear regains control of Elsa as the rest of her emotions gang tackle Anger to the ground. The situation is dire. Fear, alone at the controls, utilizes his only remaining option – RUN! Elsa promptly makes a terrified escape from the castle. She runs straight ou

t the front door, through the courtyard, across the fjord and into the mountains, inadvertently freezing the entire kingdom in the process.

“Your power will only grow. There is beauty in it, but also great danger. You must learn to control it. Fear will be your enemy.” – Grand Pabbie to young Elsa.

A few hours have passed since the icy Exodus. Now Elsa trudges up the North Mountain cold and alone in the dead of night. She reflects upon the events that transpired earlier: the coronation ceremony, the dance and the fight with Anna. It was her one slip up of the evening. Oh how fateful a blunder it was. Now everyone knows of her condition – her worst fear has come true.

As she wallows in shame she recounts another fateful night from her childhood: the night of the accident. We flashback ten years or so…

Suddenly Elsa is awoken by her baby sister Anna, who wants to play. “Go play by yourself.” she replies with a tinge of annoyance in her voice – she was having such a pleasant dream after all.

Anna regroups. Joy is clever and persistent. She knows exactly which buttons to press to get big sister to play along, “Do you wanna build a snowman???”

Elsa’s eyes light up. She follows downstairs to the ball room; Fear keeps her on her toes. She must remain quiet so as to not wake her parents.

“Do the magic” Anna says eagerly. Elsa places her hands together and summons her icy powers as her sister stares in awe. With one toe tap and a wave of the arms she turns the room into a winter wonderland.

Suddenly, Elsa slips and strikes Anna with her powers by accident. Elsa gasps as her sister crumbles into a listless heap on the icy floor. She holds Anna’s wilted body in her arms and cries out to her parents for help, “Mama! Papa!”

The King carries Anna into the forest and lays her before Elder Grand Pabbie, a troll with healing powers. Grand
Pabbie inspects her and breathes a sigh of relief, “You are

lucky it was not her heart; the heart is not so easily changed.” He modifies Anna’s memory so that she will have no recollection of the accident or of Elsa’s magic powers.  He then admonishes Elsa, “Your power will only grow. There is beauty in it, but also great danger. You must learn to control it. Fear will be your enemy.”

She never should have followed her sister that night. None of this ever would have happened. She and Anna could have remained close. She would have

been free to roam the castle, to play and attend school like a normal child.

The years she spent locked in her room – oh how difficult they were. So much guilt. So much shame. Fear hijacked every sensation in her body. Feeling meant power, and power meant danger.

As Elsa stands in the fresh snow, huddling her arms for warmth, the words of her deceased parents momentarily possess her body, “Don’t let them in, don’t let them see, be the good girl you always have to be.”

She tried so hard to be the girl they wanted and it killed her inside. They can’t control her life anymore. Besides, now that she has faced her worst fear it’s really not so bad after all.

Experience This: Let It Go