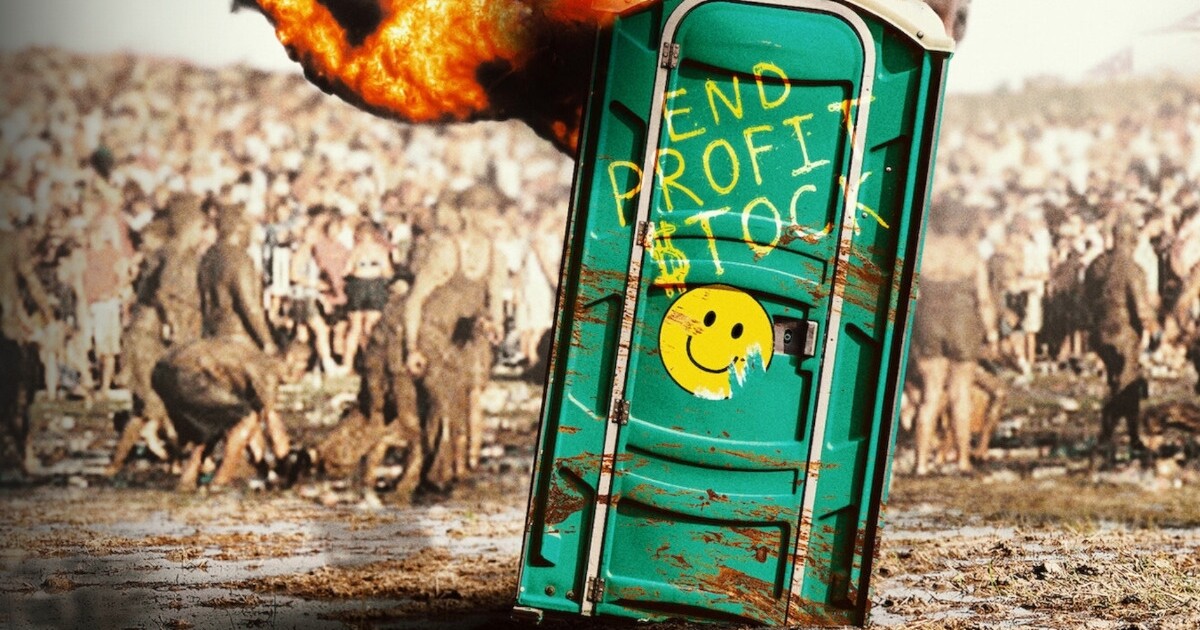 Sound travels at the modest speed 343 m/sec. So when a band like Rage Against The Machine performs to a crowd of 200k-400k people, it takes several seconds for the sound from stage to reach all the way to the back… When you watch this incredible footage – the shots from the bands’ POV up on stage, you can see the beats ripple back through the crowd like massive ocean tsunamis. Row after row of white, half-naked (many fully naked) young people jumping wildly toward the heavens like apes before the 2001 monolith.

The title is not an exaggeration in the slightest. The attempt to revive the greatest, most culturally triumphant music fest in human history, Woodstock 1969, 30 years later was a complete and utter trainwreck. Thousands were injured in violent mosh pits, or suffered heat strokes. Poisoned when sewage contaminated the water supply. Zero trash was emptied or collected. Accumulated on the ground like a solid layer of snow. Women were raped. Rampant price Gauging (I’m talking $20 for a bottled water in today’s dollars. They were seizing water at the gates so you had to buy it inside). In the end, the entire venue literally burned to the ground. And by this point this really seemed to be the only humane solution to the whole debacle. The sight Monday morning was a smoldering, post-apocalyptic wasteland. Really the only bad thing that didn’t happen was a mass-shooting. By some miracle.

When you examine all the reasons why Version 1999 went so horribly wrong the list goes on to eternity. Who is to blame? The 3-part Netflix documentary examines all the suspects in an objective manner. From the hard rock, rebel rousing headliners, to their toxic-masculine fanbase. But it all circles back to corporate greed. To grade the organizers’ performance? Worse than an F. It would have to be a World War Z. Nothing was adequate. This festival was doomed to fail. Rigged to fail, you could even say. Organizers handed out 100,000 candles to the audience on night 3 for godsake – after witnessing the carnage of the first two days.

The real spine-tingling aspect is the musicians – seeing how they react differently to the crowd. They are all sensitive. But some care more about winning the crowd, and some care more about quelling them. You see the white swans like Jewel, Gavin Rossdale, Sheryl Crowe and Willy Nelson doing everything they can to spread peace and harmony, O.G. flower power. Sensing keenly the violent potential of the situation. Fearing it. You can see it in their eyes. Then you have Kid Rock and Fred Durst, burning men’s men, who just don’t give a flying fuck what happens, saying everything they can to incite the crowd and unleash as much fury as humanly possible. The contrast is extraordinary.

We can’t call Woodstock 1999 a reflection of a lost generation, or bad human nature. Because of corporate greed we have to put at least 100 asterisk marks before the name “Woodstock”, as Woodstock should be synonymous with love and human flourishing. 400,000 hopeful music enthusiasts each paid hundreds of dollars (1999 dollars) to enter a death trap where they were treated like animals by the rich and powerful. So they behaved like animals. This is what society at large might look like if they didn’t at least give us Netflix and high speed internet while they rob us blind. Power to the people✊🏼