Feat. The Music of Air

“Some questions will ruin you if you are denied the answer long enough.” – Jeff VanderMeer

Synopsis: A soldier/biologist (Natalie Portman) enters a supernatural zone called, “The Shimmer,” where her husband, (Oscar Issac) and his military team went missing a year prior. 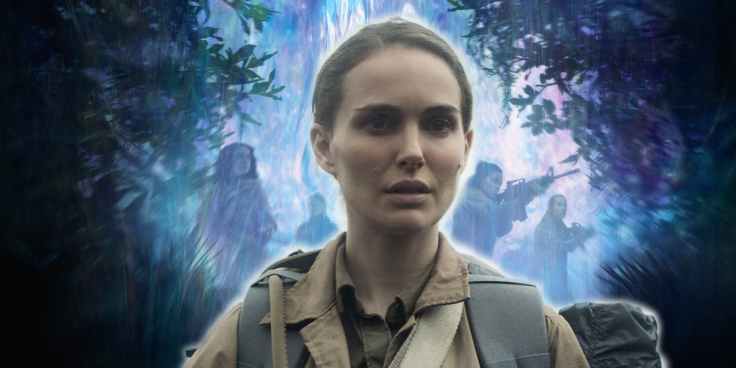 Annihilation (2018) is like a Jackson Pollack drip painting: colorful and messy*. It asks many questions and answers few cleanly. Questions about love, loyalty, death, the continuity of personhood, and the self-destructive impulse of the psyche. The viewer must wallow in the complexity of these questions, even long after the movie ends.

The film explores its questions through three scientific lenses: Biology, Psychology, Physics, and one theological: Christianity. Each perspective corresponds to a character in the story, with biology being the modus operandi, owing to the protagonist, Lena.

Lena is a retired soldier, and current professor of molecular biology at John’s Hopkins University. Her specialty is the genetically programmed cellular life-cycle. As a consequence of her studies, Lena believes death to be the result of a glitch in our DNA, one which could possibly be ‘fixed’ to prolong life, to which her husband counters: God makes no mistakes.

Lena’s research is vital to our understanding of the story as a whole, which can be interpreted as an allegory for diseases like cancer and dementia, and also how the psyche reacts to its impending doom.

We experience sympathy for Lena as she grieves for her husband (Oscar Issac) in the beginning of the film. His return shortly after, however, prevents Annihilation from blossoming into the poignant exploration of grief it could have been, and perhaps needed to be.

No phenomenon lends itself better to philosophical inquiry or “soul searching” than the experience of tragedy. So often it forces a person to confront herself, to learn, to change. Soul searching is exactly what the other four women on the expedition seem to be doing, metaphorically. The psychologist and leader of the group, Dr. Ventress (Jennifer Jason Leigh) tells Lena that all the women grieve for various reasons, and would not have accepted this dangerous suicide mission otherwise.

With her husband’s homecoming, Lena is cheated out of this opportunity. Yet, she chooses to explore The Shimmer anyway. Hence, she is an outsider among the pack. This narrative anomaly vexes me.

The mystery of the giant soap bubble is quite unsettling. Its survivors seem unable to answer even the most basic questions about their experience inside. We must discover its mysteries for ourselves. As we do, the suspense is almost unbearable.

The Fear intensifies and eventually radiates, as the team encounters numerous dangers and supernatural phenomena within The Shimmer. At one point I had to turn my head.

Many of the horrors here are not central to the story, not in the same way the alien is central to the movie, Alien. Here, that which requires “annihilation” is not some beast from without, but rather some unseen force within. It’s exact nature eludes me. Thoughts?

Annihilation can be interpreted as an allegory for biology, disease, and the psyche’s response to its inevitable demise. Alex Garland’s second directorial effort misses its opportunity to fully connect with the audience through grief. What we are left with, viscerally, is a half-baked horror/action film that is terrifying at certain times, and vexing at others. The redeeming quality, and true strength of the film is its ability to provoke deep thought and reflection in the audience. Expect the questions in this film to haunt you for hours, even days after your viewing experience.

* My favorite scene from Ex-Machina (2014), Garland’s first directed film, is when Oscar Issac and Domnall Gleeson admire a painting by Jackson Pollock, the artist renowned for his colorful and sloppy drip paintings. Pollock’s brush strokes are, as Issac explains, not delibarate, not random, but somewhere in between. “They called it automatic art.” By allowing the hand to move freely, the artist grants his subconscious mind access to the canvas. In writing we might call this “free writing” or “stream of conscious writing.”