I heard the most beautiful song the other night. The song is called “Dreams tonight,” and it is by the Canadian indie-pop band, Alvvays, off their Sophomore album, Antisocialites, released today, September 8.

It was not the first time I have heard the song. The first time was a few weeks ago. Since then I’ve probably listened to this inspired dream-pop song at least 20 times. Only just tonight, however, did I realize what the song truly means to me. Not to everyone, not to the band, but to me personally.

The music sounds like Beach House in terms of chord progression and phrasing, with a lush Cocteau Twins dream-pop guitar-driven atmosphere to boot. Alec O’Hanley plays a static eighth note strumming pattern, a la Robin Guthrie Cherry Coloured funk, with a chorus effect on his Fender Jazzmaster. Molly Rankin’s swooning, saccharine vocals are straight out of a night club in a David Lynch film, so vulnerable and hypnotic.

I heard this song as I was scouring the Northern hills of greater Cincinnati once again, working a new driving job. I call the area I was driving through the other night, The Wastelands. It is vast, and barren as the name suggests. Barren of hope, of love, and of joy. I have become all too familiar with the wastelands in recent years.

If you had a happy childhood as I did, travel anywhere between Cincinnati’s Westwood and Avondale neighborhoods, walk the streets for a few hours, and try not to weep at the carnage, or be mortified.

Go and you will see it, block after block of first world poverty. Toxic jungles of worn out buildings. Decrepid streets lined with depraved characters. Anti-social thugs, and wilting flowers. Shattered lives. Under-priveledged, under-educated, and over-medicated. Seeds of human beings doomed from birth to wither and rot.

As I drove my car on one of Eisenhower’s turnpikes(*) this night, I counted my blessings, as I listened to this beautiful music as it came on the radio. I Counted my blessings that I was raised in the best neighborhood in greater Cincinnati, Anderson township, an affluent suburb 30 minutes East of downtown.

Compared to the rest of Cincinnati, Anderson is a Utopian dream. It boasts one of the best public school systems in the State, if not the Country. My neighbors were mostly doctors, lawyers, teachers, airline pilots, architects, and successful business men and women.

I know Anderson is the best neighborhood in the city because, as an adult, I have seen the rest of the city, beginning in college nearly a decade ago. I have been on quite a journey of discovery since then. I’ll give you the short of it.

After high school, I lived for 5 years in various neighborhoods of Clifton, attending the University of Cincinnati. During this time I encountered pan-handlers frequently. Who are these people!? I wondered. They don’t have enough money to buy a house? Are they too lazy to work?

I learned slowly but surely, these people are no more responsible for their misfortunes than you or I are responsible for our learning to read or write. They are also the inevitable consequence of an economic system based on the game of musical chairs.

I worked as a surveyor for the 2010 U.S. Census, going door to door in the neighborhoods of Clifton, Corryville, Walnut Hills, Mt. Auburn, and Over The Rhine. I even surveyed a crack house!

I rode the metro bus to a business marketing internship, into downtown Cincinnati and back, every day for two semesters. More pan-handlers! I can still feel the red hot target between my shoulder blades from their gaze as I walked by them on the days I forgot change.

I switched majors to psychology, to try an understand what was happening to me, and to the minds of people around me.

I volunteered on the West Side in Camp Washington, tutoring inner-city elementary children two days a week. There I watched a beautiful little kindergartners’ eyes turn from Joy to Sadness over the course of her first school year, as her parents separated, and her once secure home life unraveled like a ball of yarn thrown to the wind. I watched as her interest in school dwindled, and finally ceased all together. Because what could be more important to a little girl than mending her broken family? Who builds a fire just to let it go out?

I played lead guitar in a blue-collar rock band in biker bars in Norwood, and Covington.

After college, I became a social worker in North College Hill. It was my job to manage adults with mental illness, and visit them, for many were without homes or transportation. My clients lived everywhere, from College Hill, Westwood, North Side, Reading, Avonale, Bond Hill, Silverton, Seven Hills, Kenwood, Winton Woods, Over The Rhine, Pleasant Ridge, Roselawn, and Madisonville.

I got bed bugs, twice! Sorry, Mom and Dad. I also saved a man’s life by convincing him that taking his own life was not his best option.

During the 2016 U.S. Presendential primary, I campaigned for Bernie Sanders, walking door to door in Northside, and Ludlow. I campaigned for hope. Hope that I would no longer have to look at these withered, decrepid shells of human beings, or feel that dreadful target on my back.

I campaigned for hope that the absurd inequality in our world would be balanced. Did you know that just 5 men own more wealth than the combined wealth of half the planet? 5 men, count them on one hand, 1-2-3-4-5, own more wealth than 3.5 billion people! Can you imagine all the needless suffering that could be eliminated if this wealth was redistributed?

I prayed for fair wages, and a cleaner, safer environment so that my children, or my children’s children might have the same opportunities I did. My prayers were not answered, however. In fact, the opposite occurred. The devil intercepted my prayers to God, and responded by tightening the noose on democracy.

Following the 2016 presidential election, I decided to be homeless for two months, as my soul protested the injustice.

It’s true, these past 8 years I’ve hit the streets harder than a hooker’s heels running from Jack the Ripper in old cobbled London. And what have I gotten out of it?

Me? I’ve gotten the ability to listen to a song like “Dreams Tonight,” and to weep on occasion, and rejoice in its beauty, the beauty of art, and its depiction of human strife. I have received the ability to get fired up about rock music, about the idea of love being just a kiss a way, about the hope of finding shelter from the storm. Of being brave enough to let your guard down, tear down your wall, and give your bleeding heart to someone, at the risk they may devour it, or won’t accept it at all. Who builds a wall just to let it fall down?

“Dreams Tonight” is perhaps a love song, or love-lost song rather. Imagining the song to be about a specific person might make it more intimate. When I listen to it, however, I imagine every person I’ve ever met, all at once, in one big ethereal, multi-fluorescent blur. My memories play in my head like pictures on a kodak carousel, and nostalgia washes over me. My feelings toss and turn with one another, In Undertow(*). Joy and Sadness cling together, embrace for impact. Time to let go? Never I say.

(*) In Undertow is the first single off the album. Def give that one a listen as well!

*Eisenhower built the highways in the 1950s, in case we went to war, so troops and equipment could move more efficiently. Now we go to war on them every day, riding the turnpikes to and from work like an absurd merry-go-round. Is there nothing more inspired? 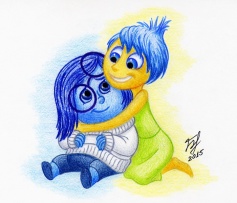 24 thoughts on “Dreams Tonight by Alvvays”