Feat. The Bond remix by Moby (In a special EFC music video!)

“It’s what keeps me alive.”

I know I have been missing in action here these past few weeks. My apologies. All I can say is that I am a hairy mammal, and it is Winter time. I see some of you have been more productive than I have. The good news is, even if I continue to post less often for the next month or two, I vow to check in to read your posts at least weekly. Hopefully that will allow me stay at least somewhat relevant, and keep up with the happenings in your life, as well as your latest musings and creations.

This one was the most difficult for me thus far. James Bond is fast, clever, and precise. The music video needed to possess the same qualities. This was also the first music video I’ve made in which I synthesized footage from multiple films (3). I also abandoned narrative strategies like chronology, meaning I do not necessarily show the scenes in the order they occur in the films. The sequence is somewhat random, but certainly not entirely random. I made it a priority to use footage that fit what I was hearing in the music, regardless of what point it occurred in the movies. This meant I had to sacrifice narrative cohesion and to some degree, intelligibility.

As much time and energy as I put into this, I have little emotional investment. My goal is to get better at these videos. So, if you watch the video, let me know what you didn’t like, and what I could improve upon in future videos. And, fellow bond fans especially, feel free to berate me for all the great scenes and characters I excluded from this. It was tough to find room for them all!

Simple answer: Why not!?

For better or worse I grew up idolizing the fictional British Spy, as portrayed in the 90s by Pierce Brosnan. I lived vicariously through the movies, Goldeneye (1995), Tomorrow Never Dies (1997), and The World is Not Enough (1999) and their respective video games.

Some of my fondest childhood memories are of playing Goldeneye N64 with my older sister, cousins, and friends. Winter was the best time to play. Especially when we could take breaks to sled-ride, build igloos and have snowball fights outside.

I would sneak to various hiding spots in my 3rd grade classroom to write my own Bond stories, complete with “bang! bang!” sound effects, musical interludes, and credits sections in which I acknowledged my classmates and teachers for producing, directing, and doing the makeup and hairstyling for all my characters. One story took place on a cruise ship, I remember. Bond teamed up with a cunning marine biologist named Abigail Shepard to stop an Oil Barren from stealing a rare bottle-nosed dolphin. Admittedly, plot was never my strong suit. 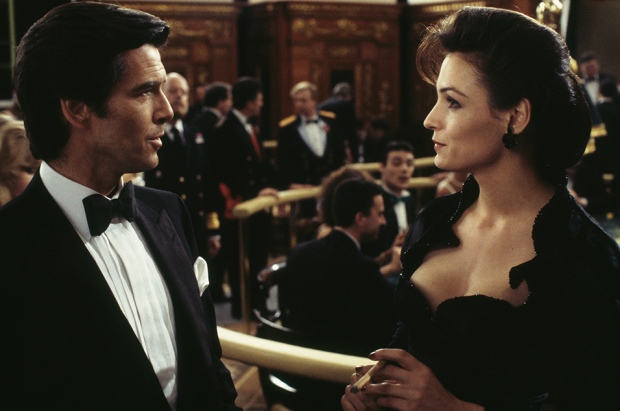 As an adult, a part of me eschews the Bond Universe for its escapist allure. Nowhere in fiction or real life will you find more attractive characters. Nor could anybody lead a more interesting or lavish lifestyle than 007. It is all just an extravagant western fantasy. So why have I now decided to devote 30+ hours of my life to celebrating it? Because let’s face it, while it may not be real life, it’s still freaking awesome.

Here is the video. The title: Fire & Ice will make sense if you watch the finale. I thought the dualism is also befitting of Bond’s and Natalya’s personalities, as well as the art direction surrounding Natalya.

Thanks for reading/watching. What is your favorite bond movie and/or Bond Video game?

See Also: The World is Not Enough & The Shadow Self